Antonio Campos and Brady Corbet discuss how they made SIMON KILLER 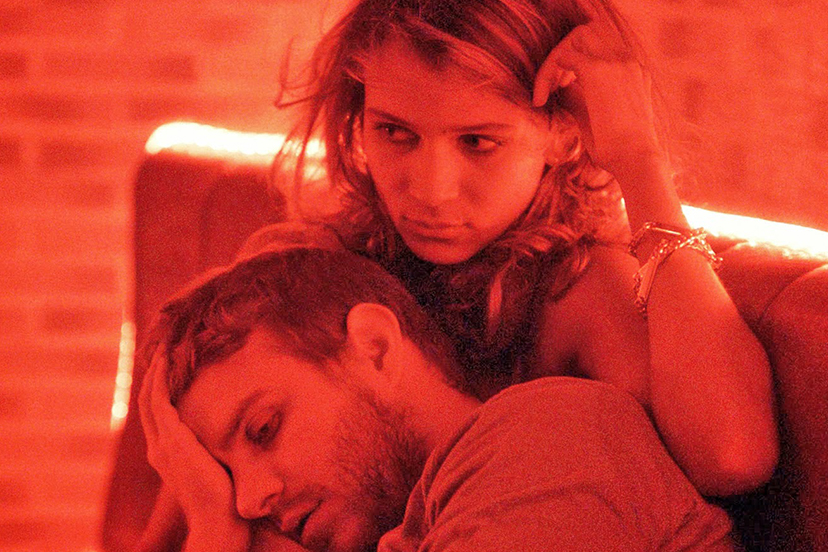 James R. Janowsky: Where did the idea for SIMON KILLER come from?

Antonio Campos: It came from a couple of different places. I had been reading a lot of books by Georges Simenon, and there was something in there about the characters and themes that were popping up in the books. And I always wanted to make a film in Paris; I knew this area because I had lived there. I also knew I wanted to make a film with Brady [Corbet]. And I had also just gone through a breakup. So all those things combined gave birth to this character.

JRJ: You mentioned being influenced by the themes in Simenon’s books. What are those themes?

AC: Men, usually with Simenon it was older men, confronting this inner demon. It is men that are on this routine path that do one thing that breaks this cycle that leads to a downward spiral.

JRJ: There was an outline that you two had worked together on before you went to Paris. In Paris you started a rehearsal process. Was there a script at that point? Did you start workshopping these ideas/themes to get a sense and feel of the story?

Brady Corbet: We workshopped every scene. Basically, from the outline there was a clear narrative that we needed to get from point A to point B, and we knew what point A was and we knew what point B was. What we workshopped was how we get from point A to point B. Some times that came from doing improv rehearsals with the other actors. Antonio would pick out what he liked or whatever he thought was working and would then transcribe that to pages, which would be our next day’s script.

We wanted to make a movie in a loose kind of way, but we didn’t want to make an improv movie. Especially the way that Antonio shoots; it’s so formal, so elegant, so particular, so precise, it wouldn’t lend itself to a straight up improv movie.

Then some things came about from discussions that Antonio and I had with some of the hostesses we met at these hostess bars. We spent a lot time meeting people in the area. Antonio met a cop that worked undercover.

AC: The really great insight and anecdotes came from the girls that worked at the hostess bars. One woman in particular that we all met and sat down with, she opened up in an amazing way, and shared her life.

BC: Several of the important stories in the film are her stories.

BC: Actually, what’s funny, in the process of the edit was that while Antonio was experimenting with a lot different things, the final version of the movie ended up much closer to the treatment than some ideas that we fooled around with. There are a few things that are different, but for the most part the intent stayed the same.

JRJ: In the beginning of the film Simon states that he studied neuroscience, in particular the relationship between the eye and the brain. Where did that come from and how did that help inform the rest of the film?

AC: It came from a conversion that I had with a friend that studied this exact thing, and did research in that area of neuroscience. Then once we figured out this is where Simon was coming from, it informed everything that we did… basically, every decision made was informed by that.

BC: I think it was a metaphor that seemed ripe for cinema. A character [Simon] that seems to possess no peripheral vision in a way; a character that only looks at what is in front of him, of what he wants at that particular moment, but is never looking at the potential consequences. There are a lot of ways to interpret the metaphor, and there are five or six ways that I interpret the metaphor, but it was a way of suggesting something we wanted the audience to think about.

JRJ: The two women that Simon has a relationship with both have their own eye issues. Victoria/Noura [Mati Diop] when she meets Simon at the club she says that she can’t see him because she is myopic and Marianne [Constance Rousseau] has a shake to her eyes.

AC: She [Constance Rousseau] was cast because of that. Brady told me about her. She was in Mia Hansen-Løve’s movie, TOUT EST PARDONNÉ, and they would edit around it. But I’m fascinated by it. It’s called nystagmus.

JRJ: I’m curious about the distortion transitions, as if losing a video signal. What was the decision to use it? Because again, I think it comes into play the idea of the relationship between the eye and the brain and what we are seeing.

AC: In the outline there was a reference to a visual interlude. And we didn’t know quite what that was. And then we were shooting, the lens was taken off the camera and we were still rolling and we noticed the Christmas lights moving in front caused this streaking. We kind of just explored that. When we came back and had a camera again, we spent hours just filming different lights. The idea was something along the lines of the mind’s eye. When I was a child I would rub my eyes to see colors and shapes, and that’s what it was, seeing with your eyes closed. That’s really what it was trying to capture.

JRJ: The camera does a couple of interesting things in the film: it follows behind the characters as if they are being followed to give this sense of paranoia and there are parts of scenes where the camera is locked down and we don’t see the character’s faces, their eyes.

AC: You get moments when you don’t see anything. People are so thrown by… it’s so amazing to me because it resonates longer than it actually is in the film. People say, “There are whole scenes when we don’t see anybody’s faces.” No, you don’t see for a few seconds. Let’s calm down about this. “Why are you not letting us see… “ You don’t see their faces for ten seconds. What’s the big deal? They’re there. It’s not like they disappeared… something about the other part of them, for me, just registers more, it says more. In that scene in particular Simon sees her and he’s objectifying her and we are seeing her like that. She’s just a body without a head to him.

BC: There is also the fact it’s amazing if you just focus on gesture, take the time to focus on gesture for 30 seconds, you see in that 30 seconds where were dancing together how much the relationship is advancing. How playful… it’s also the way with the 90 minutes or 100 minutes that we’re allotted to tell the story to quickly bring people along for the ride. This is what is happening in just 30 seconds you tell something that some movies would take two hours to tell.

JRJ: The title itself, SIMON KILLER, tells a story in its own right. It sets up certain expectations for the audience.

AC: It’s funny because it seems like a lot of the audience wants more killing. It’s true. It’s not bloody enough. They’re angry that there’s not more killing than a title of a killer suggests. I think the true title of SIMON would be the birth of a killer or something. Because that is what it is, it is about someone becoming capable of killing, more than it is about a serial killer.

And I think for us the film is incredibly violent even though the actual amount of violence on screen is very little. It’s just because it feels very violent. It feels very violent to us watching it. There’s this undercurrent of violence that Simon carries throughout the movie. While the title suggests something, I think for some people there is something more in terms of the violence than in the killing that actually happens in the movie. The film is more interested in the sexuality than the violence on screen. The film is not about a serial killer. It’s about someone that is becoming capable of killing. There’s a difference.

JRJ: There were moments were you put us in Simon’s mind. He’s reading his emails in a voice-over. Then there’s moments when he does something so fascinating, and disturbing at the same time, he was editing the email as well. It really made me feel here is someone strategically thinking about how he’s going to approach someone.

BC: Hopefully the way the film resonates is the character is bizarrely relatable in most ways. He goes just a little bit further than maybe your average Joe does or would. Who hasn’t edited an email? Who hasn’t double backspaced and found a better way of phrasing their statement or making their life sound like things are going better than they actually are? The thing is the more that we thought about his behavior, the more psychopathic like everyday behavior seemed in everyone. The biggest example being the scene where I repeat verbatim what I studied and the way I tack on “and it was published actually.” And the way that he poses that statement like he’s saying it for the first time, and he we heard him say this at the very beginning of the film the exact same way.

There is something really disturbing by the way we do this on a day-to-day basis. So someone says to you “What you do for a living?” I’m sure you have a quick capsule way of saying I’m freelance or I work for this website or I’m contributor for this or I’m a contributor of that. We all find a way of making ourselves sound as esteemed as possible because being social is hard. To have an identity and wake up every single day and live up to the expectations of a public or your friends or new people you are meeting is exhausting. So we have these sound bites that we’ve become accustom to speaking to one another. And I think Antonio and I find that a little bit disturbing. It’s understandable and relatable, but a little disturbing. We were trying to find… we were always searching for the banality of evil or evil of banality, which may be something else.

JRJ: Can you explain how you used the film’s music to get into Simon’s consciousness and unconsciousness?

AC: There is a disconnect between the music and the scene a lot of the times. We wanted the music to be a visceral kind of hit. It’s almost like the music could be from a romantic comedy soundtrack. We were going for something that was very “poppy” and very in your face. There is this disconnect between where he is and what we are hearing, and that’s kind of what the music is doing for us.

BC: Which I think is a sign of the times. When you are on the subway and you see 100 people with ear buds in their ears or their little kindles, and the way that people really experience a city. Here we are in Paris, one of the most beautiful cities in the world, and yet it doesn’t seem like the kid [Simon] every takes the time to take his headphones out and breathe a little.