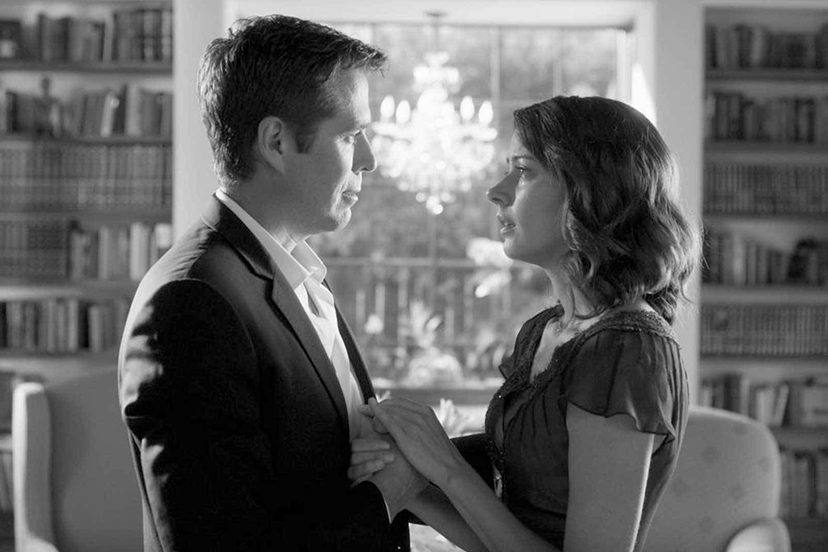 Alexis Denisof and Amy Acker in MUCH ADO ABOUT NOTHING.

Interviews with MUCH ADO ABOUT NOTHING actress Amy Acker and actor Alexis Denisof were conducted separately via phone on Friday, June 7, 2013, and edited together.

James R. Janowsky: I’ve been watching interviews of Joss Whedon and the actors from MUCH ADO ABOUT NOTHING from last year’s Toronto Film Festival to this year’s Seattle International Film Festival, and what I gleaned from those interviews was that the production of MUCH ADO embodies the heart, the soul, the spirit, and the sense of community that is independent filmmaking.

Alexis Denisof: Absolutely! Can I memorize that and steal it, and then go use that in my interviews because you said it perfectly? This is a passion project. This is funded with love, not money. Everybody that is in it that is on-screen and off-screen did it because we love each other, we love Joss, and/or we love Shakespeare. The motivations here really are pure. It is rare. And when you see that… and when you have the mastery of Shakespeare and the mastery of Joss as well, I think all of that combines to make a pretty enjoyable evening in the theater.

JRJ: I know that throughout the years Mr. Whedon has had Shakespeare readings at his home. Were you a part of those readings?

Amy Acker: I did do some of those. When I first met Joss, and I auditioned for “Angel,” he actually wrote a Shakespearian theme based on “Midsummer Night’s Dream” as my audition scene for “Angel”. That was my first interaction with Shakespeare with Joss. Then right after I got the part he told me that we do these readings. That is where I met the cast for the first time.

AA: Very much in the spirit of the movie. You would go over on a Sunday. You know that house is just open and just inviting creativity. They would have food out and wine. We would go outside and read Shakespeare. Usually Joss’ brothers are there—the whole family is the most talented musicians. At the end of the play, it would turn into music and people singing and all sorts of stuff. It became a whole day of just being around people you like and doing artistic stuff.

AD: First of all, you are absolutely right, that this production stands in a way on the shoulders of all of those readings inasmuch as it created a loose community of people that could enjoy reading, hearing, speaking the plays of Shakespeare all under the auspices of Joss Whedon’s generosity and hospitality. The fun, relaxation, the “who gives a shit let’s just do it” attitude that the readings had is very much at work in this film. And I just felt lucky to do them. They were an awful lot of fun.

When we read “Much Ado About Nothing” all those years ago, we weren’t thinking about filming it, we were just listening to another great story by the master William Shakespeare, and enjoying him. I can’t tell you that I remember that much about that particular reading other than that when I get a chance to read something with Amy, it is a wonderful day. Little did I know that it implanted in Joss the desire if he was ever to make one of these readings into a film that was the one he wanted to do and that he wanted to capture Amy and I in those roles. Fortunately I didn’t know that when we were shooting or it would’ve made me a lot more nervous and fucked it up.

JRJ: What I loved about the play “Much Ado About Nothing” is that Shakespeare really understands that love and hate are different sides of the same coin.

AA: I think that so much of Shakespeare—this play in particular—what makes it great is that they [Beatrice and Benedick] hate each other and they love each other; you have this terrible tragedy with great comedy; you get two sides of everything through the play. It is similar to how Joss writes. He’s not afraid to cross genre lines or cross tone lines. I think it makes it this timeless thing that people will be doing for hundreds of years after this as well.

JRJ: I’ve seen the film twice now. It’s so sure-footed, and the clarity of the storytelling is fantastic. People always talk about the 12 days of production. I’m assuming that it was a benefit because it made everybody focus, and come to the understanding we have to get it now because we don’t have enough time to figure things out. It needs to be done now and we need to move on.

AD: You are uniquely perceptive. So many people approach me with “12 days! Are you insane? It can’t be done. Why would you even try?” Okay, I get your point. I admit that when it was said to me it sounded a little crazy. But then on the other hand, the readings you know were two hours, so 12 days seemed like lots of time when you look at what the afternoon readings were. I was still thinking about the afternoon readings more than anything else—I thought “12 days, we might be able to do that.”

He [Joss Whedon] did say in his constant wisdom to make sure you know your lines. It sounds simple, but in this case it was extremely good advice. I would say primarily because selfishly that once we got up and started shooting it, I don’t want to waste any takes screwing up the lines because we were only getting a couple of takes. You need to go in prepared, but you also have to go in ready because it is 12 days and things are being done quickly. You also need to be ready for whatever might happen at the last minute or even during the course of a take so you can roll with it. The 12 days was a pressure in some ways, but it also inspired an extraordinary work ethic and an incredible energy, and gave us a chance to perform these scenes in their entirety, which is so rare in filmmaking.

AA: That was one of my favorite scenes. Which is funny because having read the play before and loving the play, I feel like a lot times that scene is a problem scene because you’ve got the guys right before it. They have great lines and you’ve kind of gotten the joke already by the time the guys’ scene is over, and then you play it again with the women. It often times feels like “Oh, here we go again.” It is a device that’s a part of the play. I think that Joss was worried about that as well and we talked about it, and he said that we just needed to add something great. He then had that idea of falling down the stairs, which I love. It’s one of my favorite parts.

JRJ: In an interview you said one of your favorite scenes of the film was after the quarreling Benedick and Beatrice finally come together. What was it about that scene?

AD: I love that scene because this is where the characters in a way shed all of the silliness and kind of make a step toward each other in a true and authentic way. But it’s not a straightforward love scene. It’s also almost a revenge/tragedy scene. You know the cost of this commitment is another extraordinary plot point where she extracts from Benedick the promise of revenge on Claudio. So it is a very dynamic, tension-filled scene in which a lot of the narrative between Beatrice and Benedick moves forward in an extraordinary way. Amy’s performance in the scene is phenomenal. I was just so glad to be in that scene with her and get a chance to watch her deliver that. And of course when Joss, Amy and I are together working on something, something special happens and I’m always thrilled to have the trifecta of Joss, Amy and myself, and nevermore so than in that scene.