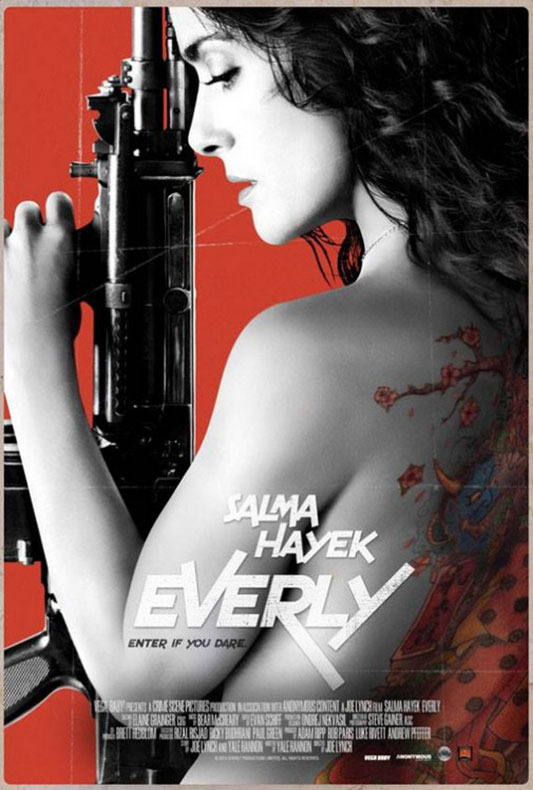 EVERLY has ninjas, prostitutes, assassins, guns, gratuitous violence, sword play, beheadings, torture, Salma Hayek… basically everything that teenage boys and young men find cool. As unappealing as EVERLY might be for the majority of the film going public, director Joe Lynch does a great job of mining every aspect of this low budget, over-the-top grizzly thriller. Salma Hayek (where have you been?) is also very good as a sex slave trying to not only save her life, but that of her mother’s and daughter’s. However, her character’s ability to dismantle and kill so many would-be assassins defies logic, but it can be easily overlooked because of the film’s cartoonish handling of violence. 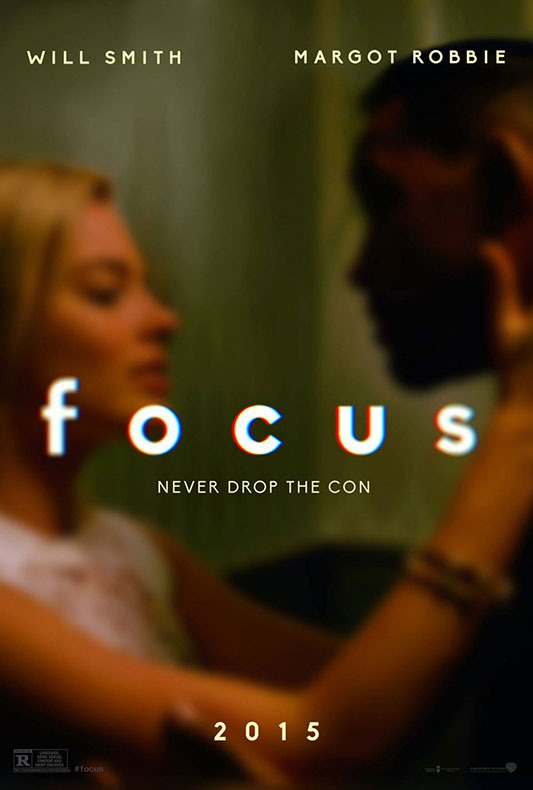 Nicky (Will Smith) and Jess (Margot Robbie) are both con artists: Nicky, the seasoned and confident professional, and Jess, the wide-eyed rookie wanting to learn. Nicky adds Jess to his rather large team for the big football game (a Super Bowl-esque event) to hustle the large New Orleans crowd. They do what any con artists do in a major studio film: they make millions and have sex (the cons are good, the sex is pedestrian–it is Hollywood, after all). What makes this film fun is that Smith and Robbie do have good chemistry… it isn’t electrifying, but there are sparks. Writing and directing duo Glenn Ficarra and John Requa do a great job of keeping the film on the rails, and supporting actor Adrian Martinez is funny as hell. 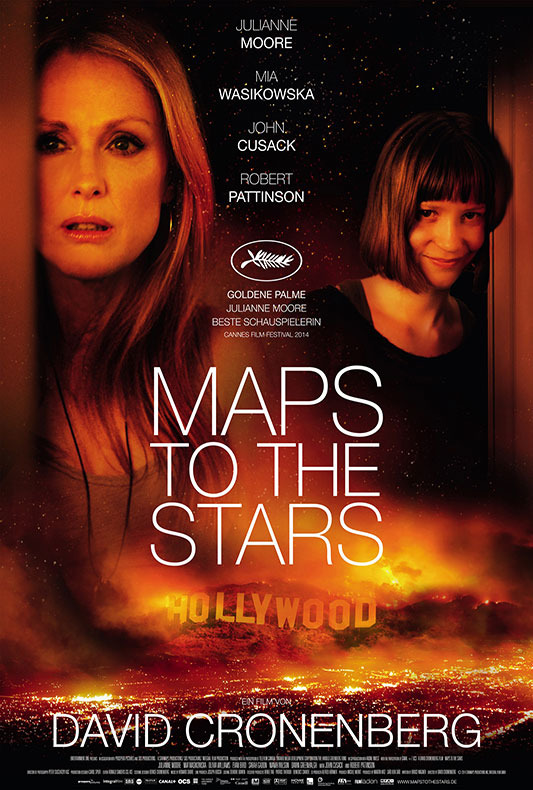 David Cronenberg’s MAPS TO THE STARS is more hit than miss. It is good, but it does take time for a viewer to get used to Cronenberg’s strange and absurd Hollywood. But that seems to be his and screenwriter Bruce Wagner’s point: Hollywood is not real, and is the home of the odd, strange, and dysfunctional. This is demonstrated by the fact that every character in the film is flawed, but none more than Julianne Moore who is a deeply insecure actress. Mia Wasikowska plays a destructive person with some serious screwed-up parents. John Cusack and Evan Bird are also good in their own demented Hollywood-way. Robert Pattinson, who was in Cronenberg’s last film, COSMOPOLIS, is perhaps the most normal. 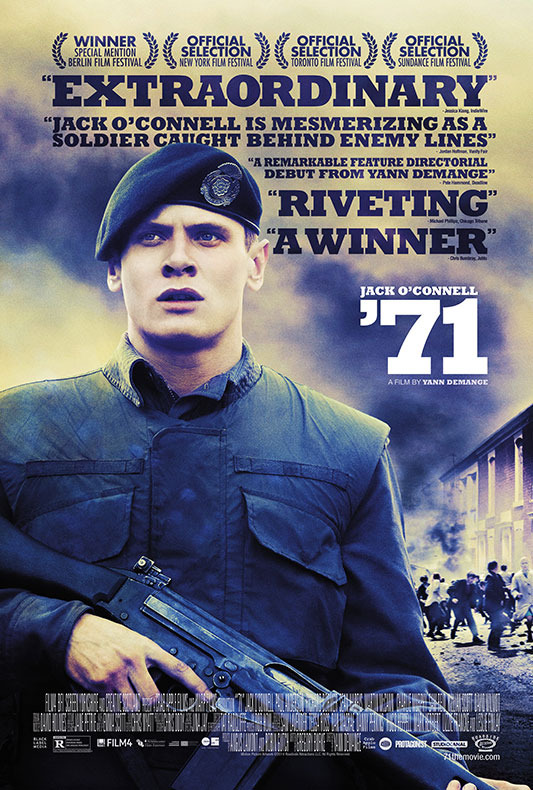 Jack O’Connell is a star in the making. He was fabulous in last year’s STARRED UP and UNBROKEN, and he is just as good in this year’s ’71. O’Connell plays good guy Gary Hook, a young British soldier who accidentally gets abandoned in Belfast during a riot in 1971. In a single night, Hook must maneuver through the dangerous Irish streets, avoiding being captured, tortured, and/or killed. Director Yann Demange (’71 is his directorial debut) does a brilliant job of keeping the era’s politics front and center as Hook narrowly escapes from one hair raising moment to the next. It is the film’s impressive kinetic energy that flows during this period of gritty survival that makes it a must see film. 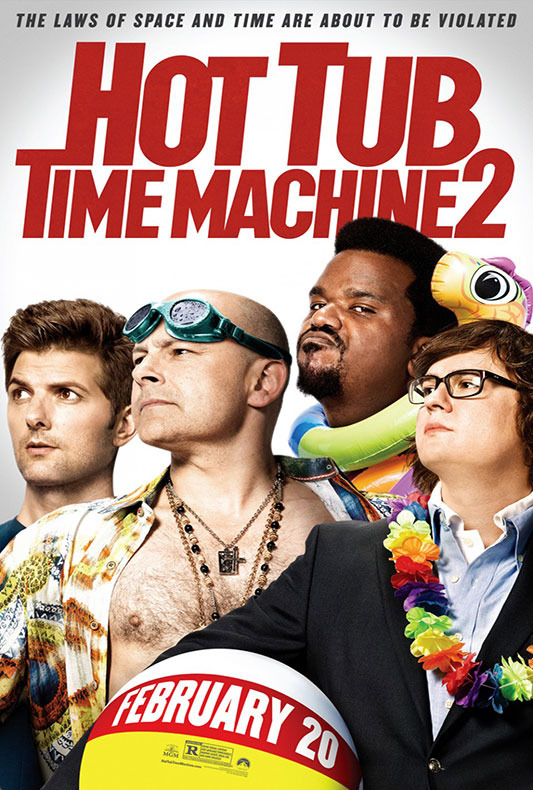 HOT TUB TIME MACHINE 2 is awful. It is an assault on the intelligence of everyone. The smartest person of the bunch is John Cusack who was intelligent enough not to return to the hot tub “franchise”. Unfortunately for Craig Robinson, Clark Duke and Rob Corddry, they decided to return to this time traveling stinker (I’m assuming for the money… let’s hope it was for the money). The first mistake was the decision to focus the story around Corddry’s character, Lou Dorchen. Not that Dorchen is a bad choice, but Corddry’s idea of comedy acting is so over-the-top that he consumes all the oxygen and light in the universe. As a second banana or in a “Daily Show” three minute bit he’s okay. But the lead? Nope. Never. Save your money and don’t see this film. 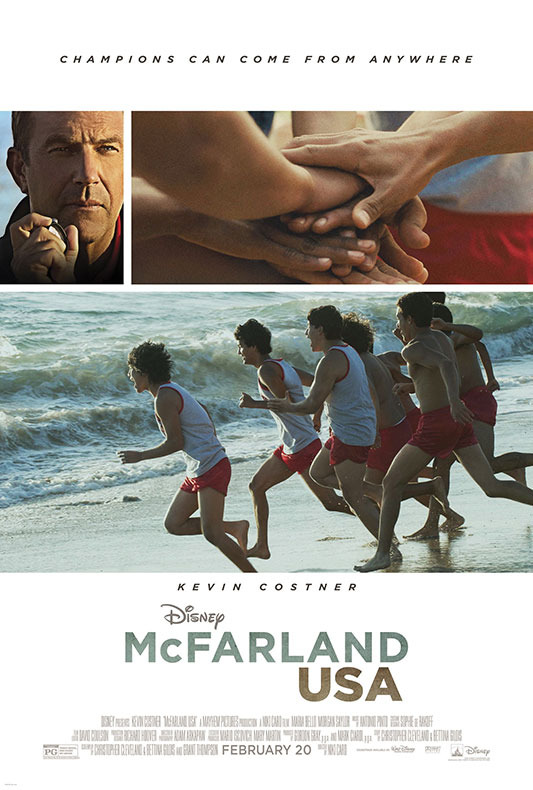 Disney’s MCFARLAND, USA is inspired by a true story about a fired high school football coach who in 1987 starts a high school cross-country team with Mexican-American kids from McFarland, one of the poorest towns in California.

Director Niki Caro (WHALE RIDER, NORTH COUNTRY) does a great job of keeping this inspirational story from being too cliché. Yes, there are moments when the film is very much by the numbers, but she adds a certain authenticity that you wouldn’t expect from a Hollywood inspirational coach/student athlete story. She also does a good job at keeping sentimentality to a minimum, but it is still there; after all, it is expected with this particular genre. 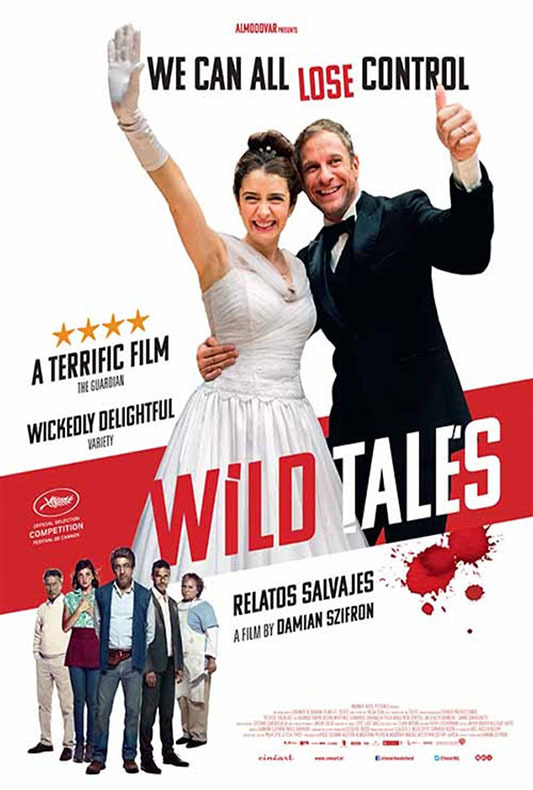 Argentina’s 2015 Oscar nominated Foreign-Language film, WILD TALES, is the combination of six dark comedic short films: “Pasternak”, “The Rats”, “Road To Hell”, “Bombita”, “The Deal”, and “’Til Death Do Us Part”. Damián Szifrón writes and directs all six films, and does a great job of keeping the quality of each short film approximately the same. Each film displays the lowest of the low in regards to human behavior, and could easily be called “The Human Animal: Rage and Revenge.” Everyone will have their favorites of the six, and mine are “Pasternak”, “The Deal”, and “’Til Death Do Us Part”. I especially enjoyed the performances of Oscar Martinez in “The Deal”, Walter Donado in “Road To Hell”, and Érica Rivas in the finale. 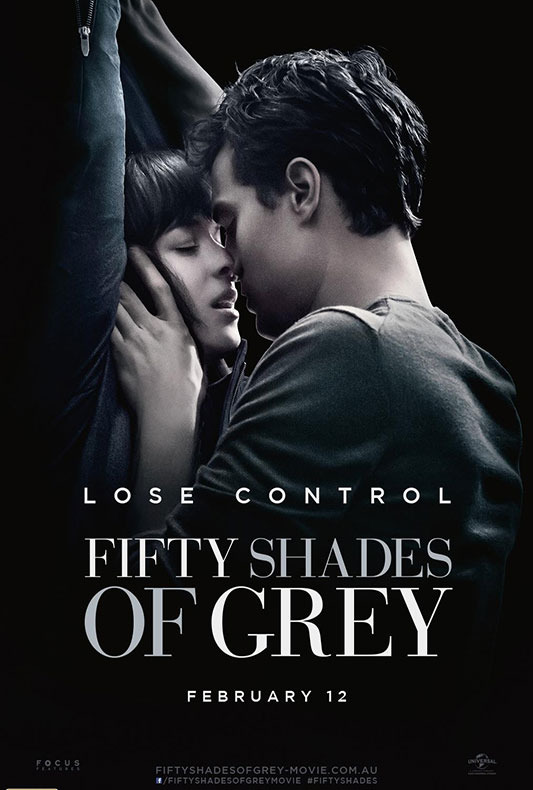 The only reason that Universal, a major studio, is involved in producing and distributing a film with sadomasochism and extensive female nudity is because of the moneymaking possibility of the rabid best selling novel fanbase. This fact demonstrates that green is still Hollywood’s favorite color, which doesn’t bother me. I just request that the film is good, which FIFTY SHADES OF GREY is not. There are some redeeming qualities in the film. I really liked Dakota Johnson’s performance as Anastasia Steele, a virgin with a heart of gold. Her co-star, Jamie Dornan, who plays Christian Grey, is physically sexy, but isn’t compelling as an actor. There are a few good scenes, but some of the dialogue is groan inducing. I give the film 1 out of 4 erections. 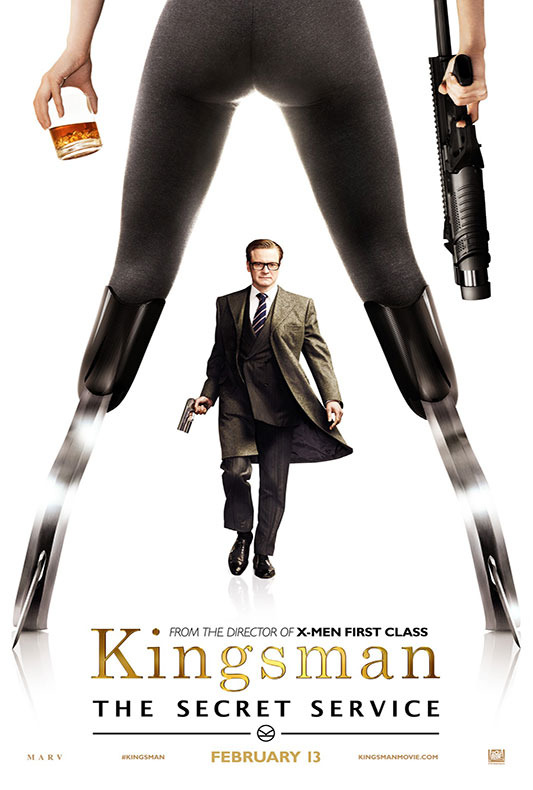 The KINGSMAN: THE SECRET SERVICE is brash, ballsy, violent, clever, funny, smart, and just downright entertaining. But you shouldn’t expect anything less from Matthew Vaughn’s second directorial assignment of a Mark Millar comic book adaptation, the first being KICK-ASS which had similar tonal qualities. The difference between the two films is that the KINGSMAN is just so much more fun to watch. Colin Firth is Harry Hart (a.k.a. Galahad, his Kingman’s codename), a suave James Bond type who sponsor’s Gary ‘Eggsy’ Unwin (Taron Egerton), a street-wise kid with a chip on his shoulder, to compete in the secret service training program. The strength of the film comes from Vaughn and Jane Goldman’s intricate adaptation. 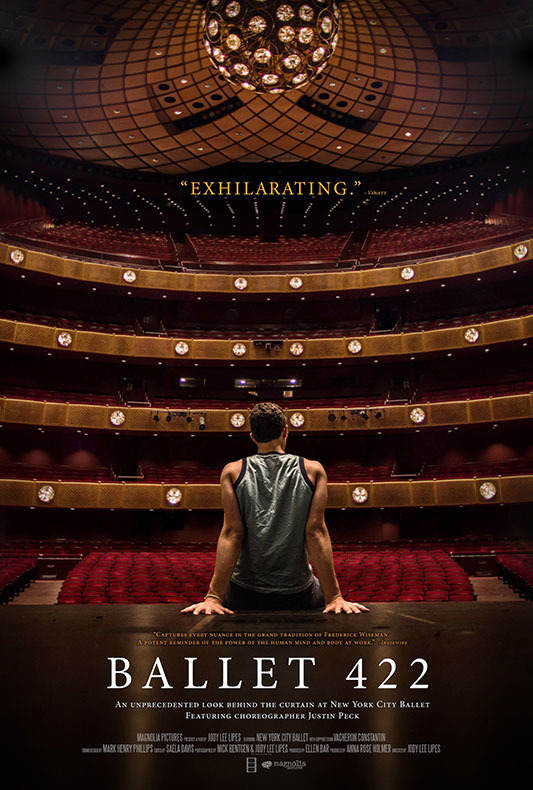 BALLET 422 is a documentary about emerging choreographer Justin Peck creating the New York City Ballet’s 422nd original production. Director and cinematographer Jody Lee Lipes (he also lensed MARTHA MARCY MAY MARLENE and TINY FURNITURE) documents Peck’s first rehearsal to the ballet’s world premiere in a “fly on the wall” style. The film itself is superficial in capturing the underpinnings of the creative process–this is Frederick Wiseman lite and its 75 minute running time confirms it. The film is devoid of drama, and plays like a home movie rather than a theatrical release. The only way this film becomes relevant is if Mr. Peck becomes famous, then the film’s historical perspective will be interesting. 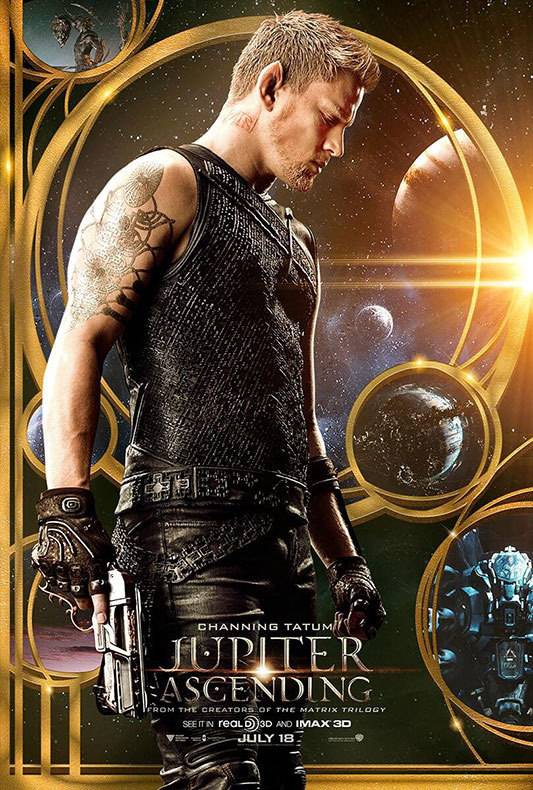 JUPITER ASCENDING is a bad film. The one good and resolute thing you can say about the Andy and Lana Wachowski written and directed film is that it is visually stunning. But that’s it for the praise. JUPITER ASCENDING is an overproduced, overdirected, overwritten, and over everything… It’s just a laughable mess.

First and foremost, JUPITER ASCENDING is a sci-fi adventure film. But the Wachowskis added the trappings of melodrama to it. By adding this overly emotional, familial element to the film, it produces numerous scenes that are just downright silly. And poor Eddie Redmayne, who may win an Oscar for his portrayal of Stephen Hawking in last year’s THE THEORY OF EVERYTHING, is saddled with some ...Read full review 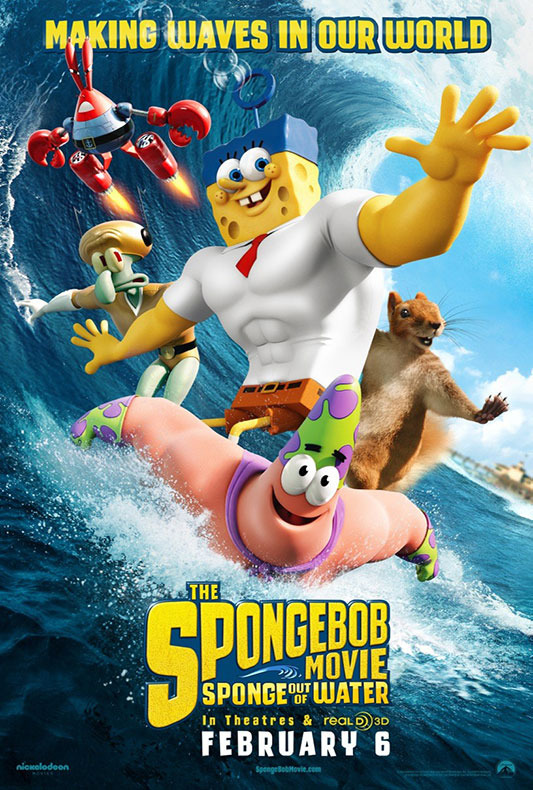 I’ve never watched a “SpongeBob SquarePants” T.V. episode or the previous SpongeBob film. So THE SPONGEBOB MOVIE: SPONGE OUT OF WATER is my first SpongeBob experience. And for a film geared towards kids, I have to say that I, a middle aged man, had a good time watching this trippy dippy kid’s animation about underwater sea creatures (at least I think they’re all sea creatures—oh, I forgot, there’s a squirrel… underwater… of course).

The closest thing that I can equate to SPONGEBOB is Warner Bros.’s Looney Tunes. While Loony Tunes relegated the majority of its characters to wild, farm, and domestic animals, SPONGEBOB goes under the sea for its creations. While I think the Looney ...Read full review 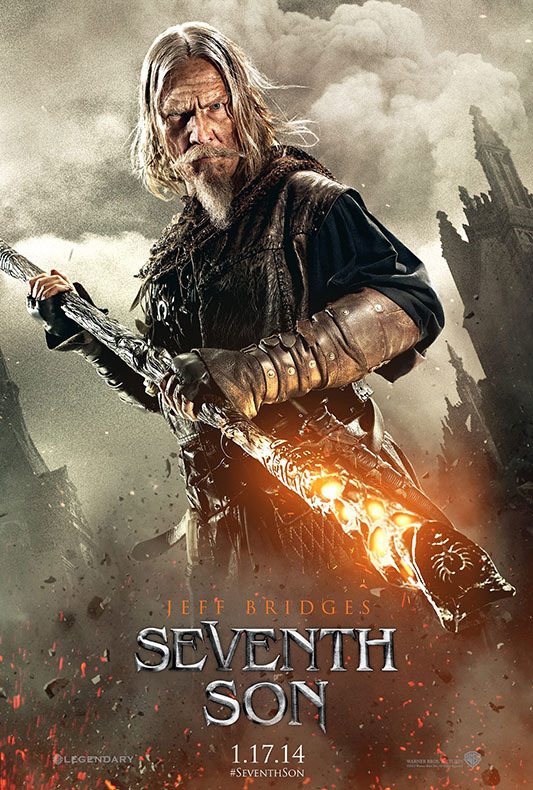 SEVENTH SON is neither a particularly good film nor particularly a bad film. It sits somewhere in that horrible place of “average”. There are several bright spots in the film: the visual effects are quite good, especially the dragons and several of the creatures; Dante Ferretti’s production design is good (as expected); the fight scenes are well choreographed; and there is a good performance by the radiant 26 year old Alicia Vikander as Alice, a young woman with a magical secret. However, Jeff Bridges’ performance as Master Gregory, a “last of his kind” witchhunter known as a “spook”, is a bit distracting with his ill-advised “mouth full of marbles” performance. And I can’t say that the story itself is all that memorable.