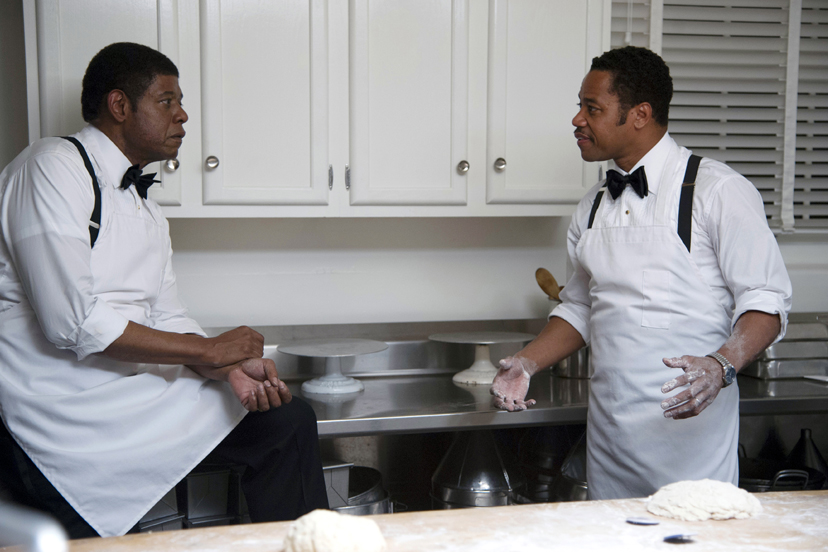 The Weinstein Company already has two Oscar contenders, THE BUTLER and FRUITVALE STATION, and it isn’t even September!

I have always questioned Lee Daniels’ ability as a film director. His 2005 directorial debut, SHADOWBOXER, was a mess; last year’s THE PAPERBOY was panned by critics; and even PRECIOUS (which I loved) was more a product of a great script and excellent performances than good direction.

As of today Mr. Daniels’ greatest asset seemed to be as a producer discovering talented filmmakers like Marc Forster (MONSTER’S BALL), Nicole Kassell (THE WOODSMAN), and Geoffrey Fletcher (PRECIOUS). But he showed me something as the director of THE BUTLER, something I wasn’t expecting from him—restraint.

Bolstered by strong performances from an ensemble cast, and reinforced by historical context, LEE DANIELS’ THE BUTLER is a remarkable achievement of telling an individual’s story over decades. Danny Strong’s screenplay, inspired by Wil Haygood’s Washington Post article, “A Butler Well Served by This Election” (http://articles.washingtonpost.com/2008-11-07/politics/36906532_1_white-house-black-man-history), does a wonderful job of juggling several storylines that span from1926 to 2009—which is no easy task.

I did have a couple of issues with the script. I wasn’t completely sold on the abundance of time given to the subplot of Cecil Gaines’ (Forest Whitaker) son, Louis Gaines (David Oyelowo), as a civil rights activist. Not that Louis’ story is bad, it isn’t, but the subplot seemed to detract from the Cecil’s story, and bloat the film’s running time to over two hours. However, by the end of the film this subplot effects Cecil’s overall character arc, and makes for an emotional—and, perhaps, a bit overwrought—scene that brings the two storylines together.

There are wonderful cameos throughout the film by James Marsden (John F. Kennedy), Liev Schreiber (Lyndon B. Johnson), John Cusack (Richard Nixon), and Alan Rickman (Ronald Reagan) as former U.S. Presidents. Robin Williams, did a serviceable job as Dwight D. Eisenhower, but seemed physically better suited to playing Harry S. Truman, who I thought he was when he first appeared.

The rest of the cast is very good. Oprah was wonderful and nuanced as Cecil’s wife, and showed no rust from her last acting job as Sethe in BELOVED 15 years ago (expect some awards play for her performance—it was that good). Cuba Gooding Jr. and Lenny Kravitz are good as fellow White House butlers. And Minka Kelly embodied the spirit of Jacqueline Kennedy, and Jane Fonda was a scary, if not a spot-on Nancy Reagan.

The film’s makeup department also deserves special mention. Too often, I think, makeup gets less of a priority by moviemakers. I’ve seen too many historical films that cover a person’s lifetime where the makeup to age a character throws me out of the movie (I’m looking at you J. EDGAR). But THE BUTLER makeup team, headed by Beverly Jo Pryor (ALI, BIG MOMMAS: LIKE FATHER, LIKE SON), did a great job transitioning the look of the characters from the 1950s to present day. Paying attention to this subtle yet important detail made the film all the much richer.

To be honest, LEE DANIELS’ THE BUTLER surprised me. From the commercials and trailers the film had “Oscar bait” written all over it. To say I went into the screening with low expectations is an understatement. But the film works. I expect Harvey Weinstein, the industry’s most effective award season campaigner, to be pushing the film during award season. Although, I don’t think he will have to push too hard because the film speaks for itself.