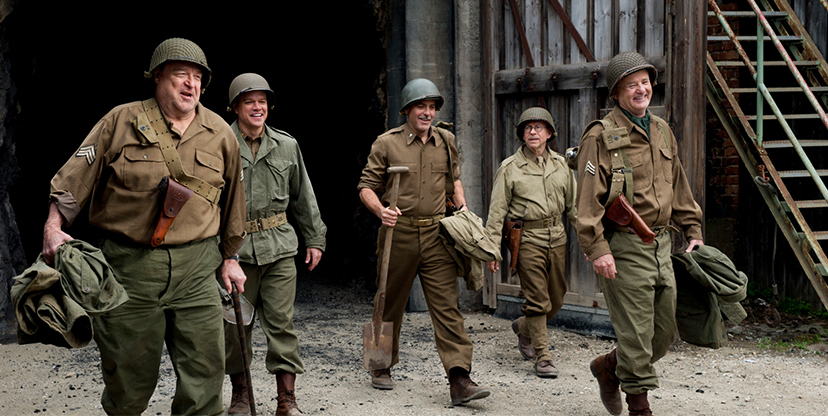 THE MONUMENTS MEN, adapted by George Clooney and Grant Heslov from Robert M. Edsel and Bret Witter’s non-fiction book of the same name, doesn’t do justice to the real men that risked their lives to save the millions of artworks stolen by the Nazis during World War II. But it wasn’t without trying.

You can tell that Mr. Clooney, who also directed and produced, and Mr. Heslov, who also co-produced, wanted to honor the spirit of the real Monuments Men by giving each of the film’s characters a decent amount of screen time (should be noted that each character in the film is inspired by and have different names than the actual Monuments Men). Giving each supporting character a substantial amount of screen time could have worked if there was a clear main character leading the men on their mission, but that wasn’t the case. Frank Stokes (George Clooney), who had the idea of the Monuments Men and personally chose the men for the mission, seemed to be the de facto protagonist at the beginning of the film. But any idea of a strong main character soon dissipated when the team got into the war and split up to find the stolen treasure. This lack of a true unifying leader and splintered storylines diminished the overall dramatic thrust of the film.

I didn’t mind watching scenes of the men after they split into teams. Scenes with Bill Murray and Bob Balaban were for the most part very funny and engaging. The same could be said for scenes with John Goodman and Jean Dujardin, who a couple of years ago won a lead actor Oscar for his performance in THE ARTIST. However, the separate storylines seemed oddly disconnected, even though both teams had the same goal of saving the stolen art before the defeated Nazis destroyed the artworks.

But where I think the film ultimately fails is that it never had a natural sense of progression. There was no clear step to clue A to clue B to clue C to eventually finding the art that you would expect from a detective story. Important events seemed to happen coincidently, with only an occasional setup. And perhaps that is the film’s biggest problem. The filmmakers never thought of the story as a detective movie, finding step-by-step clues to the stolen art. Instead, the tone and overall feel of THE MONUMENTS MEN is that of a 1950s Hollywood patriotic war film, devoid of the graphic horror and violence expected of battle; an anachronism to a modern movie going audience that has seen SAVING PRIVATE RYAN, BLACK HAWK DOWN and THE HURT LOCKER.

The storyline that interested me the most was the one with Monuments Man James Granger (Matt Damon) and Claire Simone (Cate Blanchett), a museum official who covertly kept track of where the Nazis shipped stolen artworks and eventually, if not reluctantly, gives that information over to Granger. It would have been a much smaller movie than the one that was made, but I think it would have been a more compelling and dramatic story than THE MONUMENTS MEN.