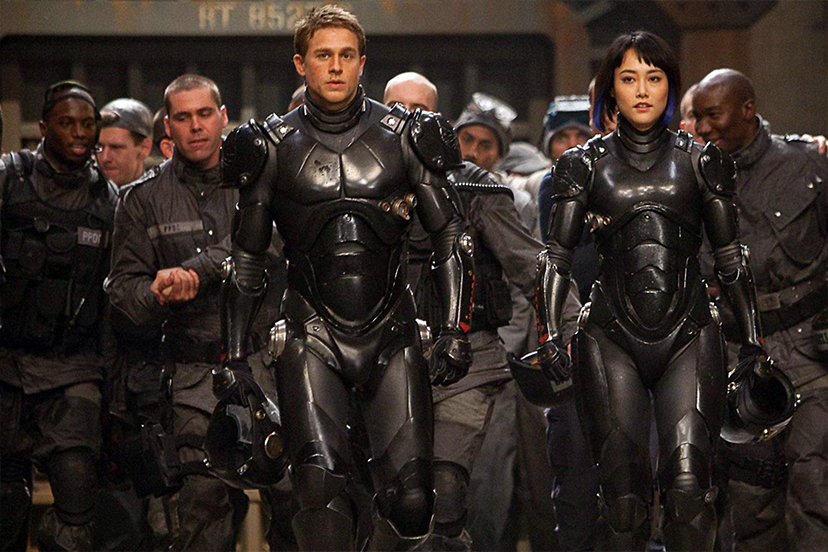 Guillermo del Toro, co-writer and director of PACIFIC RIM, is a master at creating memorable cinematic imagery. The horrific beauty of the pale man in PAN’S LABYRINTH and comic book adaptation of the HELLBOY world are good examples. What del Toro does get right in PACIFIC RIM is the design and battle scenes between the legions of alien monsters, known as Kaiju, and the Transformer-esque robots, called Jaegers, which are controlled simultaneously by two pilots whose minds are synched via a neural bridge.

But where the film falls short is its lack of cohesion between the battle scenes and the story of the Jaeger program. There is a TOP GUN-esque subplot between Raleigh Becket (Charlie Hunnam) and Chuck Hansen (Robert Kazinsky), two Jaeger pilots, that is reminiscent of the Tom Cruise and Val Kilmer competitive testosterone tiffs in Tony Scott’s 1986 film. This petty quarrel seems misplaced at a time when human extinction seems imminent. If we’ve learned anything about humanity since the Boston Marathon bombing (or even 9/11 for that matter), it is that we come together during difficult times.

There are also two scientists, Dr. Newton Geiszler and Dr. Herman Gottlieb, played wonderfully by Charlie Day and Burn Gorman, respectively. Unfortunately, the characters’ eccentricities and witty banter make them feel like they belong to the world of HELLBOY, not the technological advanced world of the Jaeger program. As an example, at one point Gottlieb is writing a formula on a horizontal sliding chalkboard—a chalkboard! This is a film that has robots that are the size of buildings, people being neurally connected, and colorful, if not beautifully rendered 3D computer graphics placed in the foreground of shots at the Jaeger command center. A character using a chalkboard seems anachronistic, and more a stylistic choice rather than inherent to this world.

Ron Perlman plays Hannibal Chau, a profiteer who sells Kaiju parts on the black market. He wears futuristic designed sunglasses and pimpish colored suits with metal clanging boots. Hannibal would be a perfect villain in HELLBOY (I would actually love to see Ron Perlman’s Chau battle his Hellboy—that’d be fun!), but in PACIFIC RIM this clownish character diminishes the underlying doom. Basically, there’s a lack of film world verisimilitude in PACIFIC RIM.

The saving grace of PACIFIC RIM is the fight scenes, which are fanboy fun to watch, especially in IMAX 3D. (They do get a bit repetitive by the end of the film, and lose their effectiveness.) Idris Elba does a wonderful job as Stacker Pentecost, leader of the Jaeger Resistance. Rinko Kikuchi is good as Mako Mori, an inexperienced Jaeger pilot. But on the whole I expected more, and wanted more from PACIFIC RIM. It’s not a bad film, just not the blockbuster I was expecting.