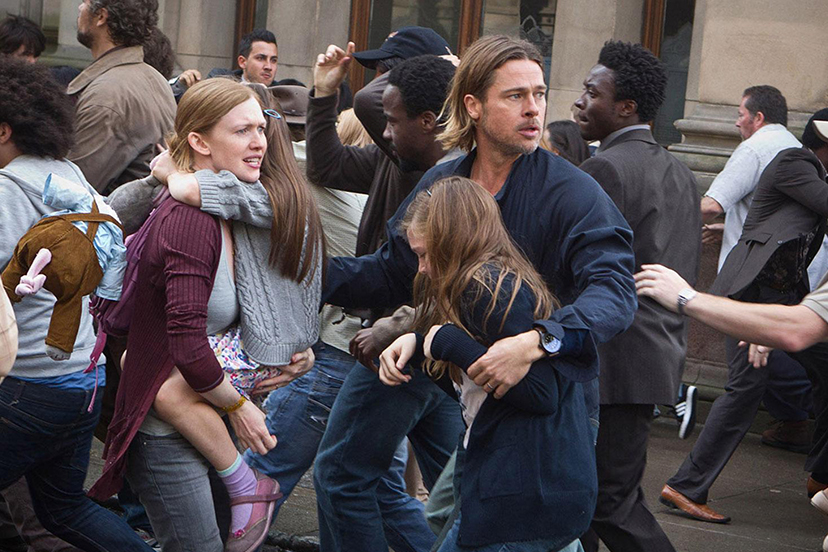 I wasn’t sure what to expect from WORLD WAR Z. The general buzz about the film with its much publicized reshoots, a release date being pushed back six months, and a budget that ballooned to an estimated $200 million, was a film that was going to be bad. Fortunately the buzz was wrong. The film is tension-filled, smartly crafted, and for the most part well executed. That doesn’t mean the film is perfect—it has its issues! But on a whole, I liked it.

You have to give kudos to WWZ’s director Marc Forster (MONSTER’S BALL, FINDING NEVERLAND, QUANTUM OF SOLACE) and the several screenwriters that worked on the adaptation of Max Brook’s book for the way they started the film. It is a minimal setup. Gerry Lane (Brad Pitt) is at home cooking breakfast for his wife (Mireille Enos) and two elementary-age daughters. The next scene they are trapped in their car in a Philadelphia traffic jam. What did we learn about Gerry from those two scenes? He loves his family and he would do anything to protect them. And folks, that’s all we needed to know because for the next 30 minutes the film goes into overdrive—and I loved every minute of it!

The stakes are simple and easily understood: escape the ravenous, fast-moving zombie horde or die. It’s about survival, and using every possible means to do so. And Gerry, an Ex-U.N. Investigator, who several times in the film says movement is life, does just that to get his family to safety. And for a film that is entrenched in a B-movie genre that has blockbuster aspirations—it is brilliant.

After Gerry gets his family to safety, the film slows considerably. It goes from Gerry surviving and saving his family, to him country hopping to find a cure to stop the zombie disease. The pace, the tone, the dramatic action all changes, and I understand (at least partially) why some people would say that the film is “stitched together out of odd parts” (or even slow). But I disagree.

I liked the fact that WWZ takes its time to tell the story that it wants to tell at its own pace for the last two-thirds of the movie. How many times do I see plot-driven summer fare that goes from one action scene to another action scene without even a thought of taking a breath and having a real scene that furthers the story and reveals character? Why can’t a modern screenwriter come up with a great scene like Quint’s Indianapolis speech in JAWS, the father of all blockbusters? The answer: I believe that today’s Hollywood thinks excessive action equals boffo box office and they believe—and this even more insidious—that the modern audience doesn’t have the attention span for a four to five minute scene.

Now, to be honest, there’s no great scene like Quint’s Indianapolis speech in WWZ, but there are some wonderful scenes and even, I would say, a few tender displays of humanity. Brad Pitt does a good job as Gerry in service to a plot-driven film that doesn’t leave room for an award-winning performance. There is also an ill-advised voice-over at the end of the film that seems tacked on (television journalists reporting would have been better). And the commercial airplane scene—which is viscerally great—falls apart when you realize that there is no way that a zombie could have stowed away on the aircraft.

I’m not sure where WWZ ranks in the zombie film pantheon. I assume that the zombie fanbase will not have the same warmth for WWZ that they have for Romero’s films. They may favorably compare it Danny Boyle’s 28 DAYS LATER, but I’m not sure it matters. For 116 minutes I had a good time, and I think you will too.